MAJOR JOHN RICHARDSON NEWSLETTER
I decided to start this Newsletter which will gather information and new research about Canada’s first novelist and which will include comments, criticisms and suppositions by readers of his works because there is a small but growing circle interested in him and there should be a place where it can all be found. I know of a collector or two of his works as I have been approached to part with my three volume first edition of Wacousta, the only copy extant which Richardson signed. I am pleased that his works have become available [some from my web site]. I await the discovery of others such as Jack Brag in Spain, which someone somewhere must have saved. My discovery of his Montreal newspaper, The Weekly Expositor; or, Reformer of Public Abuses and Railway and Mining Intelligencer, the only copy of which was in the Bibliothêque et Archives Nationales du Quebec, I discussed in my 2004 revision of Richardson’s biography, The Canadian Don Quixote. Also, my discovery of Richardson’s play, The Miser Outwitted, which was reprinted in The Theatre History in Canada, Spring 1986, with my comments, led to more conjecture in the revised biography. Years ago a lady who ran a theatre in Connecticut wanted to find a copy of Richardson’s court martial in Spain to use as a drama but a search of courts martial in the National Archives at Kew Gardens and for the papers of the British Legion in Spanish archives has had zero returns. More information on Richardson’s first wife Jane Marsh and what really happened to her would be welcome news. Their marriage certificate stated that she was from Leamington Spa, England, which was a fast growing centre in the early 1800s. When I was researching for the biography in the 1960s, a librarian from there sent me a photograph of a Mrs. Marsh of Leamington but with no definite relationship to Jane. I speculated a little more about her in my 2004 revision.
Since much of Richardson’s fiction is based on real events, readers may wish to add details about his characters. For instance, concerning his Westbrook, the Outlaw, it was Richardson’s uncle, Alexander Askin, who arrested Andrew Westbrook and took him to gaol in Niagara. In researching for my From Bloody Beginnings, I discovered that Billy Fairchild went back to Delaware and persuaded the Westbrook brothers to come to Canada whereas years earlier I had found sources that claimed the family came from Massachusetts, which I wrote in Andrew Westbrook’s biography for the Dictionary of Canadian Biography. I am interested in knowing more about Betsy Hickman, whom Richardson wrote about in his A Canadian Campaign and his The Canadian Brothers, that is after she married a Kentucky judge in 1823 and bore him a son in 1824.
Comments about articles and books on Richardson are welcome, for instance on Michael Hurley’s brilliant The Borders of Nightmare; The Fiction of John Richardson—and on James Reaney’s stage adaptations of Wacousta and The Canadian Brothers, and on the acting careers they started. If someone will be giving presentations on Richardson or writing articles, they could announce them in the Newsletter and add critiques of what they are thinking.
I shall add bits of information from time to time but I trust that others will oblige to make it an interesting Newsletter.
Posted by David R. Beasley at 8:06 AM 71 comments: 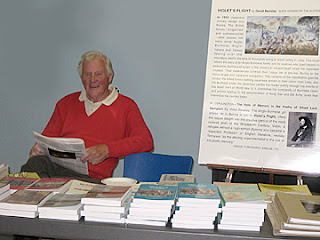